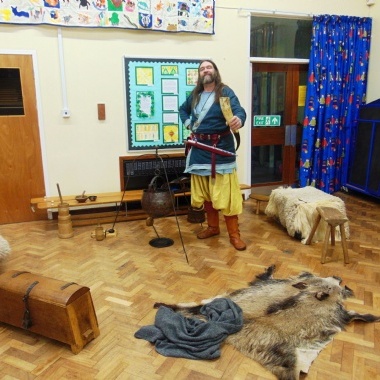 On Monday 8th January, Year 6 was invaded by Vikings! With the authentic cold weather outside, the children (and adults) came dressed ready for battle – axes, swords and shields at the ready.

To start off the children were all gathered in the hall to learn about whom the Vikings were and where they came from. They also found out a little about how the Normans became known as such and about King Harold’s arrow to the eye.

After this, the children were split into three groups to take part in activities on a rotation. There was a quiz, which taught the children about the origins of the names of the week, explained how Vikings would have navigated and identified what objects were made from. The next activity was a board game where one player was the fox and other was the geese. The aim was for the fox to ‘steal’ the geese by jumping over them (like in draughts) or for the geese to trap the fox by preventing him from moving anywhere. There were some master strategists but there were also some very cautious players who simply wanted to avoid the action – they possibly wouldn’t have made the greatest Vikings.

The final activity saw the children learn about artefacts and the archaeological evidence that has been left behind. The children got to hold (and smell!) a Viking horn used for mead, beer or ale and to see how impractical a glass was! In addition, the children were very interested to hear about the toilets and how farm animals would have lived inside!

In the afternoon, the children were all gathered together again and started off by hearing about how money was made and how the Vikings bartered (not always fairly!) This was followed by a lesson in Olde English. Finally, the children were introduced to the weapons and armour that were used – including swords that would cost the equivalent of a 3-bedroom house in modern money. They also discovered that the myth that the Vikings had horns on their helmet may have come from the composer Wagner!

All in all, it was a fabulous day with lots of surprises, giggles and learning.